This can be a single contractor, who takes care of the whole project, or a series of subcontractors – groundworkers, bricklayers, roofers etc, or companies providing those services - hired on an ongoing basis. But who will supervise all these tradesmen? And how will you know if they're doing things properly? Remember self build is all about taking control. You decide how much or how little you exercise, though generally speaking the more you give up, the more expensive it is. 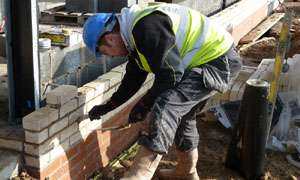 The costliest approach, therefore, is likely to be the 'turn-key' operation, in which you hire an architect or a design and build package company to handle everything. They can help with finding a plot, and might even have a list of available land in your area; design your house; source a contractor; project manage the build and hand over the finished property on completion.

At the other extreme, DIY selfbuilders will do much of the labour themselves using the building skills they already have, learning new ones and working alongside tradespeople hired for specific jobs. This is the cheapest approach to self build, but also the hardest. Most selfbuilders fall somewhere between the two, buying, for example, a timber frame design off a package company who erect it, but then hiring in subcontractors to clad it, roof it and fit out the interior.

Many selfbuilders manage their own projects. Others, less confident or experienced, prefer to hire a professional project manager. Certainly, it is advisable to have access to someone whose expertise and judgement you trust - if only for reassurance.

Traditionally, architects have fulfilled this role, but other building professionals, such as a builder, a building surveyor or a retired building inspector, can also help. Professional project managers - some of which are former selfbuilders - exist and often advertise in our classified section. Many selfbuilders, however, are perfectly satisfied with the single contractor they hire - often on the basis of having worked with them before, or having seen them work for a relative or friend.