ICF, as it is commonly known, is a flexible and highly efficient building method that, with some basic training, lends itself to DIY.

One of the biggest advantages of building your own house is your choice of options, but even so most selfbuilders end up sticking to brick and block or timber frame for the shell of their new home without ever fully investigating the alternatives. 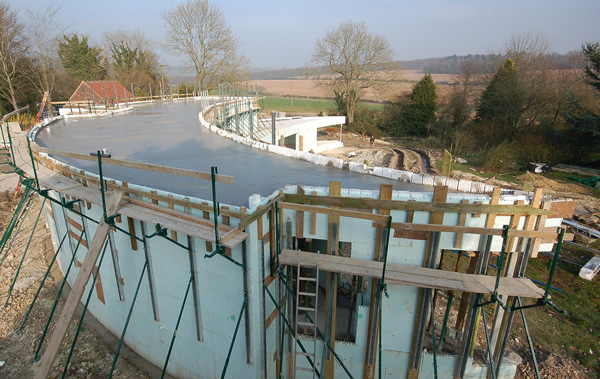 Insulating Concrete Formwork (ICF), otherwise known as Permanently Insulated Formwork (PIF), is an insulated concrete building system which was first used in Germany in the 1950s and has been growing in popularity in the UK as a building method for some years. The first ICF houses to appear in this country were built in the 1970s, and now the system is really taking off as a viable alternative to brick and block or timber frame.

ICF is an innovative modern method of construction which combines the intrinsic strength of concrete with the exceptional thermal insulation properties of polystyrene to produce cost-effective, durable structures. 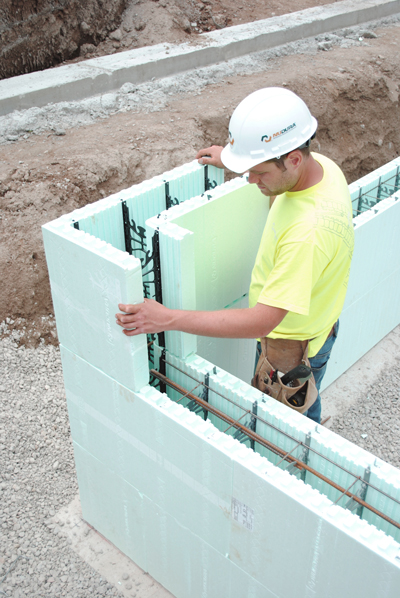 Picture: Insulating concrete formwork uses polystyrene connected with a web system that allow the forms to be stacked and steel reinforced. (image: NUDURA)

There are various systems on the market, varying in format, size and detailing, so do your homework to find out which system will best suit your site, design and pocket. The most common materials used for the ICF forms are expanded or extruded polystyrene, providing u-values ranging from the standard 0.30w/m2k, as required by the Building Regulations, down to 0.11 w/m2k. 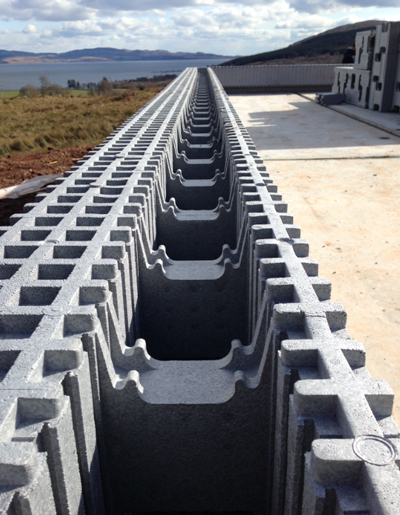 Externally the walls may be clad in virtually any material, including bricks, stone, tiles and timber, which will need to be tied to the shell of the house using either built-in fixings or wall ties. Render may be applied directly to the outer layer of polystyrene, making this an easier and less expensive option, and internally plasterboard can be attached directly to the formwork, or on battens.

One potential problem may be the difficulty of adapting an ICF house once it has been built, including adding or moving window and door openings. For this reason it makes sense to involve an experienced architect from the start, who can design the house to suit both its inhabitants and the chosen ICF building system. 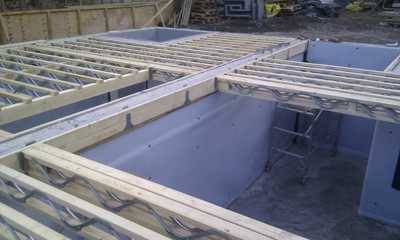 ICF walls can be built directly off any suitable foundations, and water-resistant concrete may be specified for areas where a damp-proof course would be needed. ICF is ideal for basement construction, but if the walls are earth-retaining, have large openings or have significant loads applied to them then they may require reinforcement.

Picture: ICF lends itself to use in basements. (image: PolySteel Warmerwall)

ICF is light and east to handle without mechanical assistance, and the components are delivered to site in packs or bags. The blocks interlock vertically and horizontally to form a continuous void, that is then filled with concrete, and the two leaves of formwork are held together by a matrix of polystyrene, plastic or metal connectors.

Blocks can quickly be cut to shape on site using a hot wire or a hand saw.

Lintels for openings are light, pre-formed components, manufactured to suit specific opening sizes, which are delivered as part of the ICF package to interlink with the other components. Additionally, the formwork is flexible, meaning that traditional or contemporary designs may be accommodated and a variety of shapes are possible, including curves. 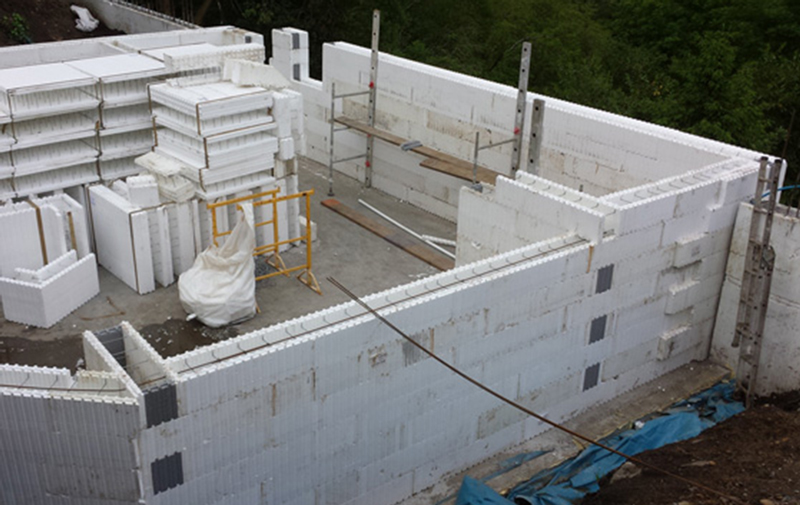 The basic structure is typically erected by a team of three or four site operatives, and filled by pumping a very workable readymix concrete in storey-high lifts. A boom pump will require suitable access for the trailer, and is usually charged at a fixed rate price per day. Although all ICF systems are designed to withstand the hydraulic pressures of wet concrete it’s important that the concrete is specified, placed and compacted correctly to avoid failure of the formwork. 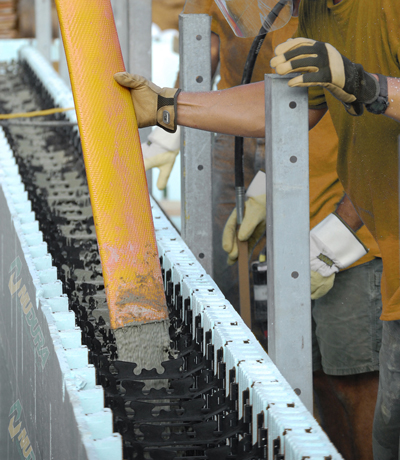 The formwork remains in place after the concrete has cured, and forms an integral part of the building’s insulation, supporting and providing stability to the concrete which ensures that vertical wall surfaces are free from distortion. Manufacturers can provide proprietary propping systems, and normal scaffolding may be used to access the tops of the walls and provide temporary propping for the formwork while the concrete cures.

Most ICF systems have compatible flooring systems which can be poured at the same time as the supporting walls, providing a solid connection between the two building elements, but they also all have timber systems where joist hangers penetrate the ICF walls before being concreted in. ICF can also be used for internal walls if required. Alternatively, most other wall systems are appropriate.

The ICF system enables the installation of the conduit, cabling and ducting for services within the wall space of the forms before the concrete is poured, which is an efficient method of construction and saves time. Alternatively, services can be chased into the inner wall of polystyrene using specialised tools after the concrete has cured. Lightweight internal fittings may be attached directly to the plasterboard or EPS with appropriate fixings, but for heavier items it may be preferable to drill and plug into the concrete core of the wall.

ICF is popular with contractors as it’s an easy system to learn and there is little need for mechanical handling, plant or equipment. Few power tools are required, which reduces noise on site, and the lightweight, manually portable materials can be easily carried – minimising the possibility of injury and back strain. Site wastage is also reduced and storage requirements are minimal, as the formwork is usually available within a matter of days and the concrete may be ordered at short notice.

One of the most obvious benefits of ICF is the build speed, and selfbuilders using ICF can expect to save between one and three months on their project time. People sometimes liken building with ICF to working with giant pieces of Lego, because the formwork blocks or panels lock together easily without the need for mortar.

Although building straight walls is a relatively simple procedure, there are details to take into account when it comes to corners and openings which make the process more complicated. Once the concrete has been poured the panels or blocks remain in place to act as thermal insulation and contain the concrete.

ICF can be erected in wet or freezing conditions, which enables a watertight building envelope to be constructed regardless of the weather. An ICF building that is under construction, with the roof installed but without any external cladding yet in place, is still weathertight enough to allow following trades to work inside. 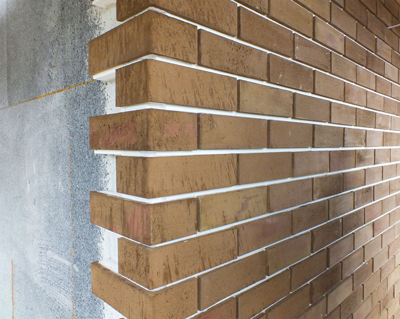 Cladding or render to the external elevation will be needed to ensure the long term weathertightness of the building and to protect the insulation layer, and the application of the external cladding should not be unduly delayed since the surface of the polystyrene could suffer ultra-violet degradation if exposed to sunlight for extended periods.

While the method is simple (there are only two components to control: the formwork and the concrete), it is not an unskilled operation, and specific training should be given for each system. In particular, pouring the concrete should be supervised by an approved installer. The support and bracing on the polystyrene blocks needs to be adequate to avoid the risk of walls distorting or even bursting open due to the pressure of the concrete.

ICF construction is capable of providing a low level of air leakage through the dual impact of the sealing effect of concrete and the low permeability of the insulating formwork. This combination provides a highly effective air barrier. The simplicity, robustness and rigidity of the ICF structure will help to ensure that the integrity of the air barrier is maintained over the life of the building.

The built-in insulation is also an enormous selling point, with most systems offering a U-value which far exceeds building regulations.

Cost is sometimes seen as a drawback of ICF, and if the structure is to be clad externally in stone or brickwork then this becomes more expensive, but labour costs on ICF are very low and an experienced crew is capable of laying 5m² of wall per hour. Combine this with an external render coat and you end up with a wall costing around 5% more than timber frame. Many ICF companies offer an online cost calculator as a useful tool.

Fire retardant is applied to components used to create the formwork.

As concrete itself cannot burn or be set on fire its inherent fire resistance more than meets any current fire regulation requirements.

Although treated with fire retardants polystyrene will burn when exposed to a serious fire, producing mainly carbon dioxide and water. In a fire, the plasterboard lining will initially protect the insulation and enable evacuation of the building. If the insulation is ignited the concrete remains in place to provide structural stability. Up to four hours of fire resistance is achievable, depending on the thickness of the wall specified.

The formwork used in ICF acts as an inherent sound absorption system, significantly reducing impact sound, while the solid mass of the concrete core of any ICF wall reduces airborne noise. ICF is ideal for party wall construction, where the concrete core may be up to 300mm thick. All tests taken with ICF systems have passed the building regulation requirements to date, and acoustic tests performed at individual ICF projects can be sourced from manufacturers.

See other Next Steps Guides »