Natural local materials offer a green and user-friendly option for your build. 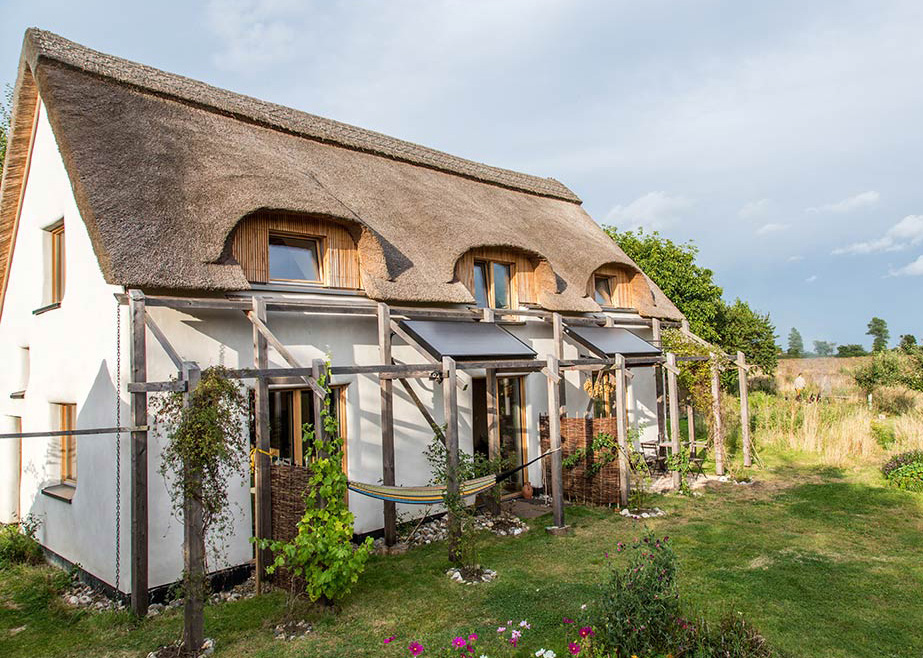 Choice is one of the greatest benefits of a self build, but most selfbuilders still end up sticking to brick and block or timber frame for the shell of their new home without ever investigating the alternatives. Mention of earth and straw-bale building may have you sneering, but some beautiful, eco-friendly and relatively inexpensive houses are being built using these systems.

There is no reason why the structural system you choose should dictate the building’s final appearance. Cob and straw bales may have a more rounded look than bricks, but this doesn’t prohibit them from being used in both traditional and contemporary designs.

Unusual forms of construction can make future purchasers and lenders wary, however, and this can affect resale values in some cases. A structural warranty should allay any fears, but be prepared to shop around for finance and competitive insurance rates, as companies may be cautious of more unusual techniques.

The first UK straw-bale house was built in the 1990s and there are now several hundred in the country. If these homes are designed and built well they can last more than 200 years, and no other building material is as easy to build with or provides so much insulation for such little outlay. Tests have found that even unrendered straw-bale walls are less of a fire risk than timber walls, whilst rendered walls are no more flammable than bricks.

Lack of knowledge means that most selfbuilders still shun straw bales as a viable alternative to masonry or timber frame, but it is possible to work with private Building Control companies instead of local authorities, who may have more experience of these natural materials. 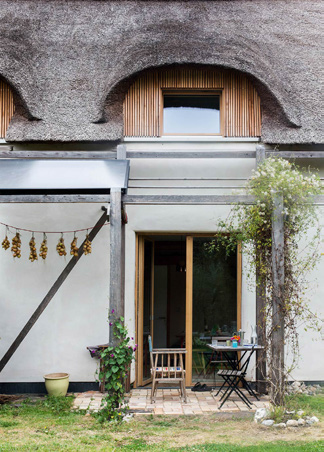 This straw-bale house in Norfolk by Anne Thorne Architects has a timber triple-glazed high-performance windows, lime render and limewashed walls and a Norfolk reed thatch roof.

Designs should be kept as simple as possible to make the build both manageable and cost effective, although there is no limit to house height or the number of storeys if a timber frame is incorporated into the design. A plinth wall and roof overhang will be needed to protect the walls, in addition to a weatherproof but breathable external plaster. Bales should be dry, well compacted with tight strings, and of uniform size and shape. The straws should be quite long (at least 150mm), with no signs of vermin having nested during storage and no damp. 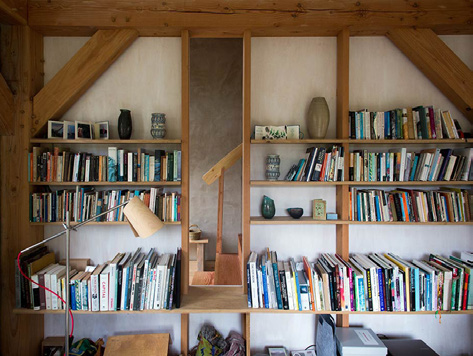 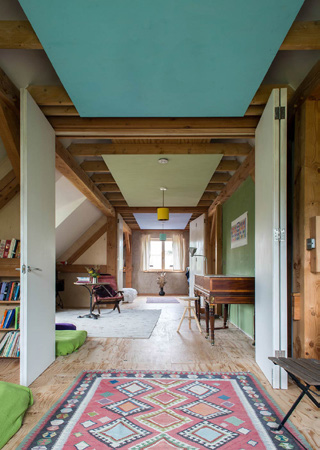 There are four main ways to build using straw bales. The load-bearing Nebraska method requires no frame, and involves the straw serving as the structure, insulation and surface for plaster. This method is ideal for extensions.

With the infill or timber frame method the straw is only used as insulation and a surface for plaster. Hybrid methods combine the best of both these techniques, and are especially useful when a large section of glazing is required in a wall. For the prefabricated method the wall panels are built using timber and straw before being erected on site. Pre-fab panel homes are more expensive than other methods, but are still appealing to selfbuilders due to the speed of construction, with a three-bedroom, two-storey house weathertight in less than a week.

Although straw bale is the ideal DIY building material it’s still advisable to have experienced people on site to offer advice and guidance on how to make the building airtight and thermally efficient – with straw bale homes able to achieve Passivhaus standards.

Keeping the straw dry is vital to avoid rot, and ideally the roof – or a temporary tarpaulin cover – will be in place before the straw is installed. Prefabricating all the timber components and installing these first is also advisable.

The straw must be plastered and decorated with vapour-permeable materials such as lime and clay plasters, limewash and clay-based paints to prevent damp. 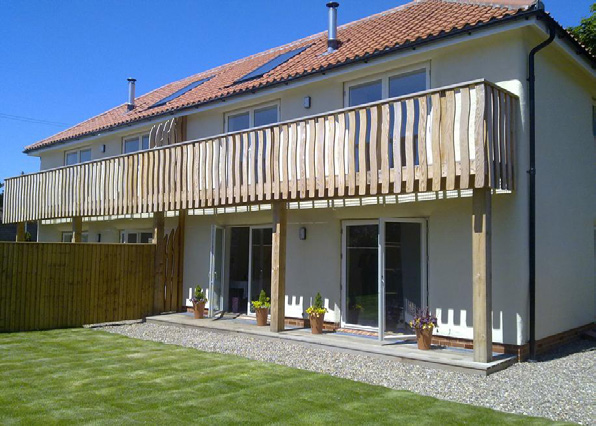 Above: Council houses designed and built by Straw Works

Approximately one-third of the world’s population live in houses constructed of unbaked earth, and in Britain the tradition is predominantly represented by cob – the West Country name for a building method in which subsoil is mixed with straw and water to make a consistency suitable for placing in horizontal layers to form walls. These are heaped onto a stone undercourse and trodden down. Cumberland also has an ancient tradition of cob building and there are thousands of earth buildings throughout this country.

If you live in an area where earth dwellings are found in the vernacular architecture you can be fairly sure that the soil will be suitable for building. Vitally, 10 to 25 per cent of the subsoil (the lower layer) should be clay, and it is possible to have your local soil analysed by experts to determine its suitability.

Building with earth is not as straightforward as it might sound, and it’s advisable to work with a professional to ensure that the design and construction are sufficiently robust. It should be possible to complete some of the physical work on a DIY basis if required, but training will be needed in order to obtain the correct earth mix and to understand the build process. 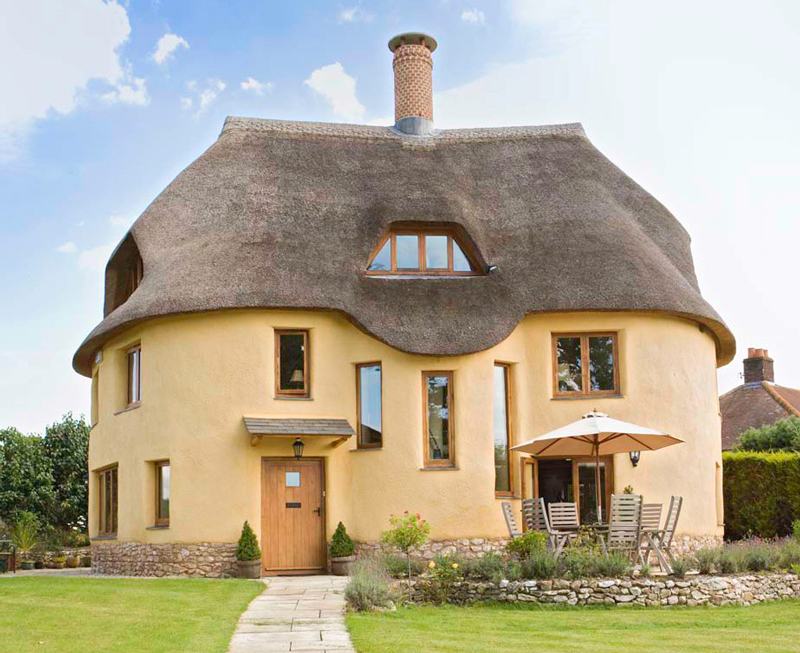 For cob, a subsoil containing roughly equal proportions of clay and silt, sand and fine gravel is mixed with water and straw to a fairly stiff but malleable consistency. This is then built up in successive layers of about 600mm high on masonry plinth or underpin course. Walls are normally 450 to 600mm thick and each layer, or lift, is left to dry out before the next one is laid, until eaves level is reached. Shuttering can be used to build cob, but it is not necessary and makes the construction process more complicated.

These days cob can be mixed by rotovator, or even using a JCB, but traditionally the mixing was done in a pit with animals to trample and mix the earth and straw. This inevitably meant the addition of waste matter in the mix, and led to a common belief that cob required a small percentage of dung, which is actually untrue. 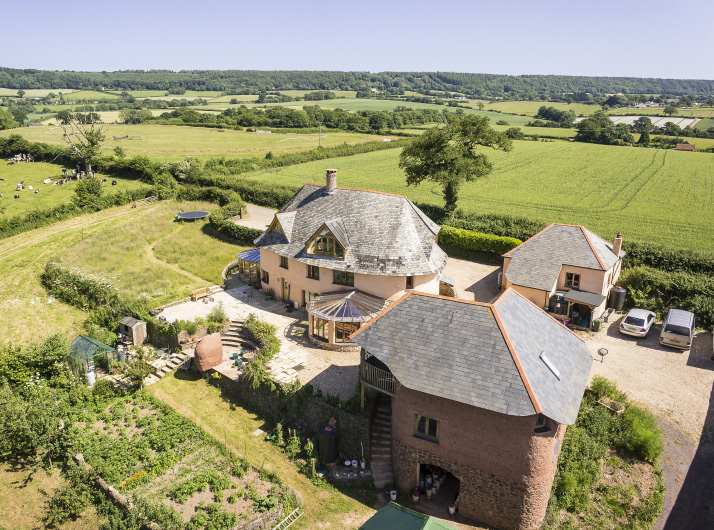 There is an old Devon saying: ‘All cob needs is a good hat and a good pair of boots.’ A stone or brick plinth forms the waterproof base, while the ‘hat’ may take a variety of forms, with thatch being the most traditional choice. 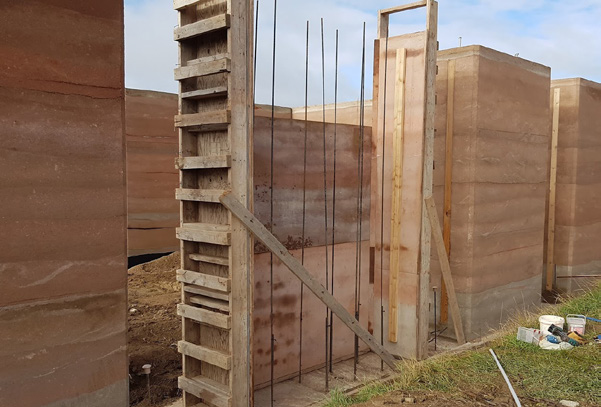 Rammed earth is formed by compacting moist subsoil inside temporary formwork (shuttering). Loose, damp soil, containing no straw, is placed in layers 100 to 150mm deep and compacted using either manual or pneumatically powered rammers. When the soil has been adequately compacted the formwork is removed, usually straight away.

Construction can proceed continuously, without waiting for successive lifts to dry out and wall thicknesses vary, typically from 300 to 450mm. The advantage of this method is that the process is quicker and the building won’t shrink so much when drying.

Adobe or clay lump is an earth/straw mix similar to that suitable for cob construction, which is placed into timber or steel moulds to form bricks or blocks.

Once dried out these can then be used to construct solid or cavity walls using standard bricklaying techniques, with the blocks being laid in either an earth or composite earth/lime mortar.

Earth building is simple and relatively inexpensive, and the materials are renewable resources which are recyclable and thermally efficient. The soil can often be dug from the building site – eliminating transportation – and the construction process consumes virtually no energy and produces no environmental pollution.

Earth construction can be used to create curving, organic shapes and, as more people rekindle the tradition, building with earth is becoming acceptable to local authorities. The thermal and acoustic properties of cob are well known for out-performing other more conventional systems, with the thick walls acting as a huge heat store. Well-built earth walls can last for hundreds of years if properly maintained and protected from the effects of rising and penetrating damp.

Earth-walled buildings should be treated in exactly the same way as those with walls of masonry or timber-framed construction by the planners. Any objections raised would normally be concerned with the appropriateness of the location, design and finishes, not with construction materials and methods.

Compliance with the Building Regulations can be achieved by supplying sufficient data and adequate construction details to enable the building control officer to make an informed assessment of the proposed building. Over the past few years numerous earth-walled buildings have been built in Britain with full Building Regulations approval.

The Devon Earth Building Association produces a leaflet explaining how cob walls can be made to comply with the Building Regulations. New and existing cob walled buildings can be constructed, altered, extended or changed to comply, although it is important to incorporate the aims of the Building Regulations into the design process as early as possible. Earth buildings need to ‘breathe’ and, move and are especially sensitive to dampness and changes in temperature. Modern materials such as cement renders and emulsion paints which restrict this can cause severe damage by retaining water within the walls, and it is important to continue the tradition of using plasters and renders made with lime and finished with layers of limewash for this reason. For more information consult the Devon Earth Building Association and Straw Works.

See other Next Steps Guides »