Building walls with bricks and blocks is still the preferred method for housebuilders in England and Wales; its big selling point when compared to timber frame is flexibility. Less precision is required for foundations, and changes to plan are more easily accommodated than with a frame which has been built off site. 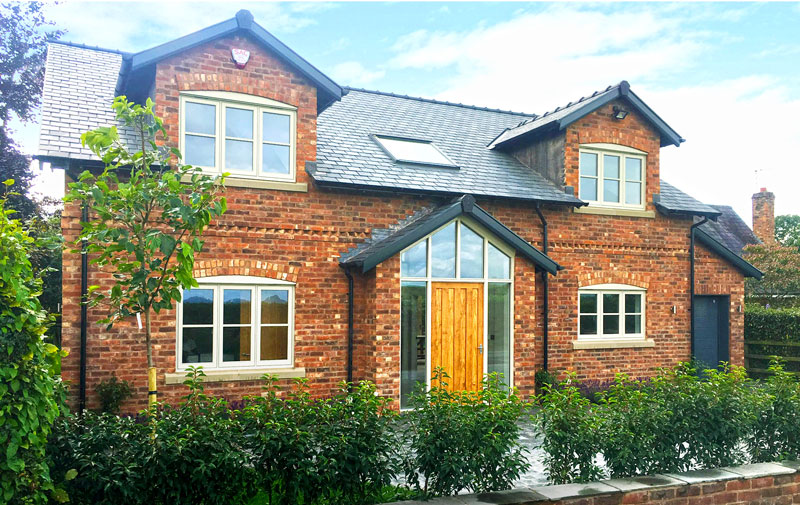 A new build in Cheshire with 3in Reclamation Handmade bricks from Imperial Bricks.

Another factor that’s contributed to cavity masonry’s popularity is the widespread availability of an experienced workforce: housebuilders can rely on an existing skills base, and competition in the marketplace ensures that labour costs remain competitive.

Once built from two walls of brickwork separated by a gap to prevent damp from penetrating, cavity walls have evolved over the decades. After World War II the inner leaf of brickwork began to be replaced with concrete blocks and, later, insulation was added to the cavity and lighter, less dense, thermal blocks were used to provide better insulation.

Now, external walls will typically be of cavity construction, with an external brick or rendered blockwork face and an internal wall of blockwork which, when combined with certain partition walls, provides structural support for the floors and roof. To stabilise the two skins, they are tied together using corrosion-resistant wall ties.

The cavity space between inner and outer leaves should be a minimum of 100mm wide, and accommodates insulation to improve thermal performance, as well as creating a rain barrier and preventing heat loss.

The typical build process in the UK involves building both walls in parallel, then adding insulation either as the wall is built, or injecting it once the cavity is complete.

Historically, the size of the cavity has grown in accordance with insulation requirements, which has led to an increase in width.

In the self-build market, cavities of 125 to 150mm and beyond are now common, largely due to the priority that selfbuilders place on energy efficiency.

Alternatively, slimmer specialist insulation is available which enables a 300mm thick wall (including a 100mm cavity) to be built on standard foundations and meet Building Regulation U-values – ideal when space is limited.

Cavity masonry construction provides excellent protection against moisture ingress in almost all conditions commonly found throughout the UK, and the standard full fill cavity can be used in all but the most exposed areas. In particularly wet and windy locations, partial fill cavities are used in order to carry away any water that penetrates the outer leaf.

Regular concrete blocks are still widely used, particularly for foundations, in block and beam floors, or when a high thermal mass is required. They are the least expensive form of blockwork on the market. 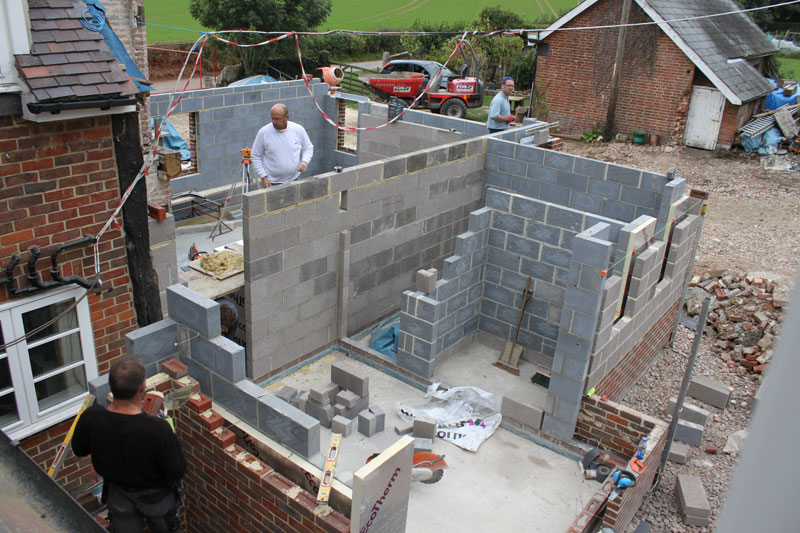 Lightweight aircrete blocks incorporate air in the concrete and have dominated the housebuilding industry for many years – providing improved insulation to standard concrete blocks, in addition to being easier to cut and handle.

Thin joint construction involves laying aircrete blocks without a bed of cement mortar, and instead using a thinner bed of rapid-setting glue mortar, which enables larger blocks to be built more quickly. The mortar is just two or three millimetres thick, as opposed to the usual 10mm for standard mortar.

An outer leaf of brickwork, which is both decorative and functional, remains a popular choice for selfbuilders in this country. Maintenance free and generally acceptable to the planners, there are literally thousands of different bricks on the market to suit all budgets, regions and tastes.

Your architect or designer may have suggestions, and local planning officers could also have some input – pointing out colours and textures which are preferred in the area. If you live in a Conservation Area or other sensitive location, they may even dictate exactly which brick they prefer. 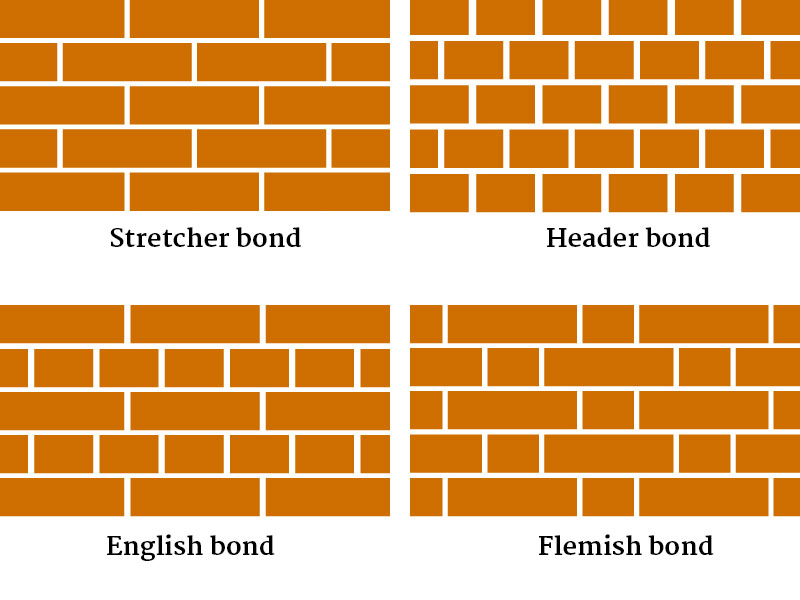 Builders’ merchants often have brick libraries on the premises, display brick panels and offer sample packs to take away, which is particularly useful when it comes to showing your chosen bricks to the local planning authority.

Alternatively, you could try approaching a brickworks direct to view their products, or match your bricks with a property you admire in the area.

Remember to allow enough time when ordering, as certain bricks can be on a long waiting list for delivery, and specials may take six weeks or more.

Not all bricks offer the same physical qualities and, although appearance is an important consideration, it’s also vital to choose the correct category of brick for your project - with weight, strength, water absorbency and density all important characteristics about which your brick supplier should be able to advise you.

Only the most experienced selfbuilder should consider building brick or blockwork walls – it really is a job for the professionals, and a botched attempt at DIY could seriously delay your project, result in poor quality workmanship and fail to meet Building Regulations.

Before employing a bricklayer ask to see samples of their work and, if possible, visit a site they’re working on and talk to the main contractor or selfbuilder. 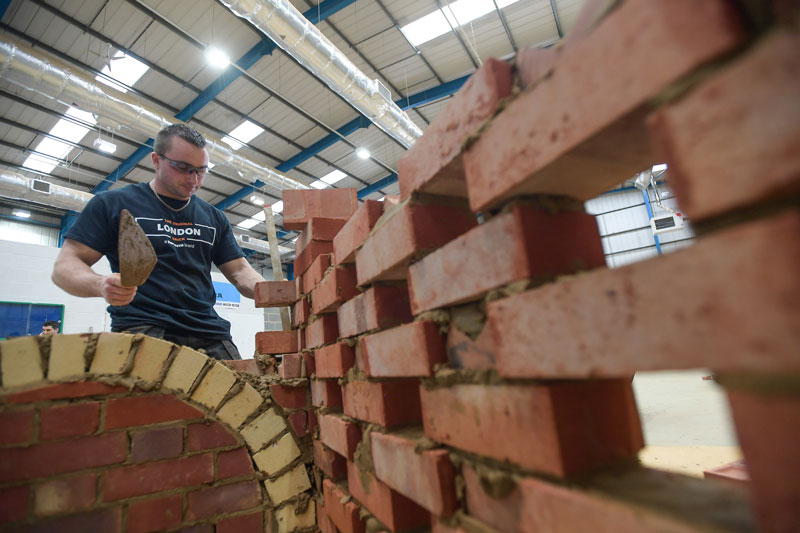 Bricklayer demonstrating his skills in a competition.

A bricklayer will usually charge per thousand bricks laid, with any decorative detailing, angles, corners and reveals all adding to this price. If you’re given a rate for the job, then confirm that this includes all extras.

Bonding patterns, mortar colours and joint detailing all affect the way a finished wall will look, and a good bricklayer will ask what type of bricks and blocks are to be used and will discuss details such as the ratio of sand to cement and/or lime in the mortar.

Brick and block is a ‘wet’ construction method which is often portrayed as the tortoise of the building world – tried and tested but slower and less glamorous than other methods. Blockwork is built in lifts, which require time to dry out and can’t be laid in extremely cold or wet conditions. Selfbuilders are usually anxious to build quickly, and this is one of the main reasons cited for choosing a timber frame – particularly in Scotland where the climate is harsher.

Brick and block supporters argue that, because constructing a timber frame usually occurs off site in a factory, the build times are actually similar. While the basic frame sections may be quickly erected, the complete construction process takes much longer as it invariably involves brickwork, which is a site trade. This argument is dismissed by timber-frame companies, who claim that well-organised selfbuilders order the frame in advance, and that this can then be made watertight more quickly than brick and block.

The truth is that the foundations and finishes take just as long in both methods, but the superstructure is much more quickly erected if it arrives prefabricated and is simply hoisted into place. Once the timber-framed shell is watertight the internal finishing trades can proceed at the same time as the external cladding is being completed – further reducing the overall build time and ensuring that bad weather does not hold up work on site.

Innovation in brick and block building, with developments such as thin joint mortar - which allows the depth of the mortar to be reduced - increases the speed of construction.

Construction speed can also be improved by using large-format concrete blocks, which have a face size equivalent to two traditional blocks.

Hollow-framed construction has a reputation for being more energy efficient than cavity wall construction, as it provides additional space for insulation.

A number of airtight, well-insulated masonry homes have been built that can outdo the best examples of low-energy timber-framed homes.

The solid mass of a brick and block wall allows the absorption of heat, which is radiated into the house, and cavity masonry dwellings generally perform well in terms of thermal mass. Increasing thermal requirements have led to a trend to use insulated dry lining - enabling cavity constructions to achieve better U-values while maintaining a 100mm cavity. 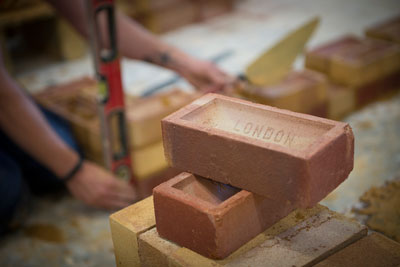 Face The side of the brick designed to be on show.

Stretcher The long face or side of the brick.

Header The short face or end.

Arris Any edge of a brick where two faces meet.

Frog V-shaped indentation in a bedding face. Bricks laid frog-side up make for a stronger bond but require more mortar.

Stretcher course Course with the stretcher or long face showing.

Soldier A brick laid vertically with a stretcher face showing.

Sailor A brick laid vertically with the bedding face showing.

Bat A brick cut across the width.

Closer Brick cut to complete the bond at the end of a wall.

Plinth Horizontal course at the base of the wall to protect against damp.

String course Projecting course for shedding rainwater off a wall.

Lintel Used to support the masonry or load above an opening.

Jambs Vertical sides of an opening for doors or windows.

Reveals Exposed vertical surfaces left on the sides of an opening after the door or window frame had been fitted in position.

Cornice Projecting ornamental course near the top of a building.

Blocking Course immediately above the cornice to prevent overturn.

Coping Course on the exposed top of a wall to prevent water seepage.

Corbel Extension of one or more courses to support wall plates.

Masonry construction is often cited as the cheapest building method and, although this may sometimes be true, overall there is usually very little to choose between paying for a masonry-constructed house or one built using timber frame.

One of the less obvious advantages to building with brick and block concerns the stage payments available for this type of build.

Timber frames must usually be paid for in full and in advance, but lenders will sometimes not release funds until a timber frame is on site and erected, which can be difficult to achieve if the frame company refuses to start work before being paid. In contrast, a selfbuilder using brick and block can pay in several installments, as and when more materials are required.

Insulating Concrete Formwork, otherwise known as Permanently Insulated Formwork, is an insulated concrete building system which combines the strength of concrete with the thermal insulation properties of polystyrene to produce cost-effective, durable structures. The formwork is flexible, meaning that traditional or contemporary designs may be accommodated, and a variety of shapes are possible, including curves. 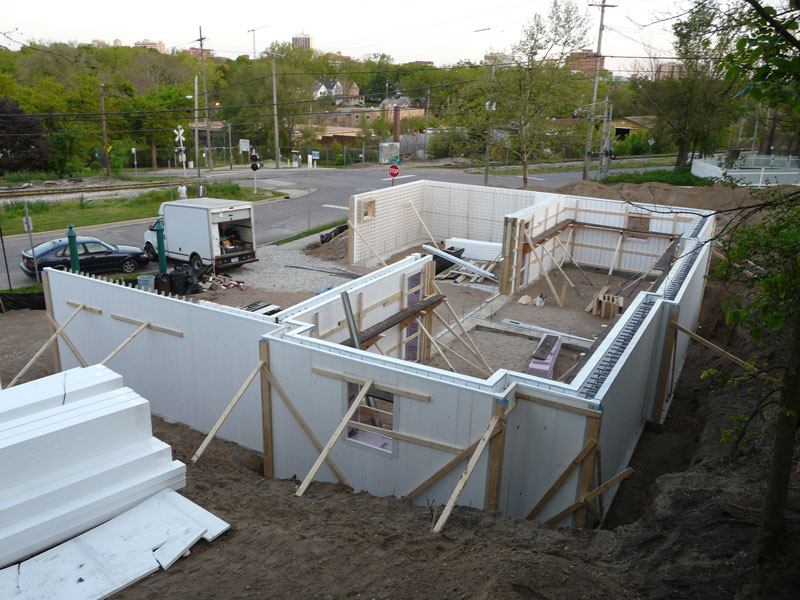 A relative newcomer to masonry construction, ICF is becoming increasingly popular with selfbuilders.

ICF forms are light and easy to handle, and the components are delivered to site in packs or bags.

Formwork blocks can quickly be cut to shape using a hot wire or a hand saw, and interlock vertically and horizontally to form a continuous void which is then filled by pumping very workable concrete in storey-high lifts.

The formwork remains in place after the concrete has cured and forms an integral part of the building’s insulation, supporting and providing stability to the concrete which ensures that vertical wall surfaces are free from distortion.

Externally, walls may be clad in virtually any material, including bricks, stone, tiles and timber, which will need to be tied to the shell of the house using either built-in fixings or wall ties. Render can be applied directly to the outer layer of polystyrene, making this an easier and less expensive option, and internally plasterboard can be attached directly to the formwork, or on battens.